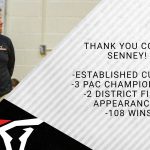 Lutheran West has announced that Trey Senney ’02 has officially stepped down from his position as Head Coach of the Women’s Basketball Program. Coach Senney took the reins of the Women’s Program in the 2014-2015 season. In his six seasons as Head Coach, the program has accumulated 108 wins. Under his leadership, the Longhorns earned three straight Patriot Athletic Conference