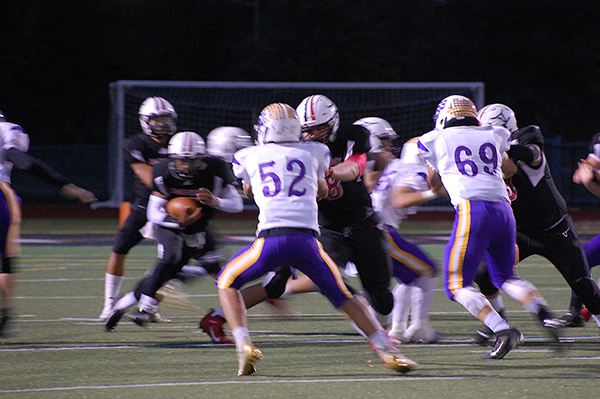 Lutheran West controlled the game from beginning to end as they took down Berkshire in a battle of 4-1 teams in Rocky River on Friday. For the second week in a row, the Longhorn defense held their opponent’s offense to zero points—in both of those games the only points their opponents scored were on interceptions returned for touchdowns. West allowed Berkshire a mere 129 yards—31 of which came on the final drive of the game with the main defensive players out of the game.

Lutheran West moved the football on offense all night only punting two times in the entire game. The Longhorns got two touchdowns from senior Jonathon Bradley and two more from sophomore Eddie Lewis. Lewis did the heavy lifting, collecting an even 100 yards on 17 carries. Lewis also caught two passes for 44 yards. Isaiah Parker had three catches for 61 yards in the first half, showing himself as a real down the field weapon for senior quarterback Austin Kim (6-17 for 125 yards passing).

Berkshire came into the game ranked ninth in Region 17. West was ranked tenth in Region 14. Coming into today’s game, Berkshire was averaging 31.7 points per game.

The Longhorn defense has allowed exactly 0 points in the past 10 quarters and only one touchdown in its three conference games. West is 3-0 in conference games for the first time since 2004 when they were in the MAC-8 and knocked off Brooklyn, Columbia, and Beachwood to start their conference season.

West will travel out to Independence next Friday for a showdown with the Blue Devils who are 2-0 in conference play and 4-2 overall.